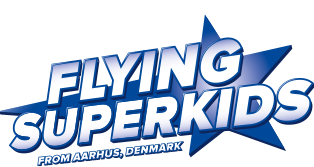 After having travelled around the world as a gymnast on the “National Danish Gym Team”, engineer Uwe Godbersen founded Flying Superkids in 1967. It started out as a gymnastic team with 20 girls, but soon the club had 400 members.

Uwe Godbersen had his own way of teaching and choreographing gymnastics. His overall idea was, that gymnastics should not be too traditional and ceremonious, and he mixed the gymnastics with funny ideas, costumes, untraditional music and lighting.
Back then he got a lot of criticism from the Danish gymnastic society, where some were so outraged that they even referred to him as “the Gymnastic Provo”. But it was the combination of the solid basic training of the children and, most of all, the unusual vision that started a new wave in Danish gymnastics.

Within a few years the best of the children started to perform all over Denmark. The international breakthrough came in 1975, when the children performed live on national German television.

The interest in the team spread like rings in the water; invitations flew in from all of Europe and, in 1982, the Superkids went on their first coast to coast tour in the USA.

Shortly after, Uwe and his wife, Lone, decided to make gymnastics and show business their full time job. They closed their construction company, bought an old farm, modernized it into a gymnastic center and founded the non profit organization “the Gymnastic Farm” in 1983. All salaries from the Flying Superkids shows go to the club.

A great home base started a new fantastic period, where the unique training facilities made learning the real difficult tricks easier and safer. Very shortly the original buildings became too small and the construction of a workshop, storage rooms, dance studio, outdoors training facilities and much more became necessary. All in all,“the farm” has been expanded more than 10 times.

Today, Uwe has retired and the Flying Superkids are now managed by Lone and their sons, Lars and Svend. However, if anybody had told Uwe Godbersen back in 1967, that the Superkids should perform all over the world for millions of spectators, he would never have believed it.
But that was what happened… it’s like a true fairy tale!